This is the third post in a series of blog posts about how to run an experiment with Amazon Mechanical Turk, using psiTurk.

This post will cover how to run the psiTurk example experiment inside of a Docker container.

Setting up the psiTurk Docker container

Now that we have Docker installed, let’s work on setting up the psiTurk Docker container. First, create a directory for your experiment on your Linode server:

Next, change to the newly created directory and create a file called Dockerfile in that directory:

Now, we want to create a Docker image that runs psiTurk and serves our experiment. I’ve already created a publicly available Docker image with psiTurk that can be used as the basis for other Docker images, so the Dockerfile that we have to create is pretty simple, consisting of only two lines. In the end, your Dockerfile should look like this:

You can add the above content to your Dockerfile by running the following command:

The FROM instruction tells Docker to build the image on top of the publicly available image called adamliter/psiturk:latest, which is an image that contains the latest version of psiTurk.

The VOLUME instruction tells Docker to expect the user to map a folder from the host computer to the folder /psiturk inside the Docker container. This will allow you to edit the experiment files on the host computer (i.e., the Linode server) and have these changes automatically reflected inside the container itself! 🎈

Now that you have your Dockerfile set up, go ahead and run the following command:

The docker build command is used to build images from Dockerfiles. The -t flag allows you to specify the name of the image. If you ever intend on making this publicly available on DockerHub, you should replace <YOUR_USERNAME> with the username for your DockerHub account. If you don’t have a DockerHub account and/or don’t intend to ever make it publicly available, it’s still a good idea to replcae <YOUR_USERNAME> with something. You could use the same username as the account on your Linode server that you’re currently signed in to. Finally, the . at the end of the command just tells docker to look for a Dockerfile in the current directory.

After this runs, you’ll now have a Docker image containing psiTurk and a prespecified place for where you ought to mount your experiment files. Let’s move on to generating and setting up the experiment files.

Setting up the experiment files

For the purposes of this blog post, we’re just going to use the default experiment from psiTurk, which you can generate with the psiTurk command psiturk-setup-example. However, you currently don’t have Python installed on your Linode server, much less psiTurk! But Python and psiTurk are installed inside the Docker image that you just built! 👀

Let’s see how we can take advantage of that fact. First, make sure that your ~/psiturk-example directory only contains the Dockerfile:

Let’s break down the docker run command, starting from the back. The part at the very end of the command (<YOUR_USERNAME>/psiturk-example) is the name of image that is the basis for the container that you’re instantiating and running (remember, a container is a running instance of an image). So, whatever you named your image in the command above, you’ll want to make sure that it is the same name here.

The next part is the -v flag. This is short for --volume, and it is what allows you to map a directory on the host folder to a directory inside the container. In this case, $(pwd) is being mapped to the folder /psiturk inside of the container. $(pwd) is a command that evaluates to your current working directory, which should be something like /home/<YOUR_USERNAME>/psiturk-example.

Working backwards still, the next part of the command is --rm. The --rm flag simply means that the container will be automatically removed when it is exited. This helps reduce clutter so you don’t accidentally end up with a bunch of running Docker containers that you’ve long since forgotten about.

Lastly, the -i and -t flags to the docker run command are related, so I will talk about them together. The -t flag allocates a psuedo-TTY, which basically just means that you are given a shell where you can execute commands inside of the Docker container. The -i flag keeps the STDIN pipe open if you detach from the running Docker container, meaning you can reattach to the container and continue executing commands in that same shell.

After running this command, you should now be looking at a shell prompt that looks something like this:

This means you’re signed in as root to the machine 66e24f5bfce1, and you’re currently in the directory /psiturk (the alphanumeric string that is the name of your container will be different for you). Congratulations, you’re inside the Docker container! 🔧  🎉

Remember that this container includes both Python and psiTurk, so we can run psiTurk commands. In particular, run the following command from inside of the Docker container:

This will create a directory called psiturk-example, which contains the experiment files for the example experiment that ships with psiTurk.

After doing that, go ahead and disconnect from the Docker container by either typing exit and hitting ENTER or by hitting CTRL+d on the keyboard.

You should now be back at a shell prompt for your Linode server. If you run the command docker ps to show all containers, you won’t see any containers since the container you were just in was configured to remove itself (--rm) when you disconeccted from it. So did we lose the files that we just created inside of the container?!

If you run the command ls ~/psiturk-example, you should see:

Let’s go ahead and make one small edit to the config.txt file in that folder. In the config.txt file, there’s a line that says host = localhost. I’ve never had any luck getting psiTurk to work with this default setting. Instead, we’re going to change this line to say host = 0.0.0.0.

Since the files were all created by the root user inside the Docker container, your user currently does not have sufficient permission to edit the files. Go ahead and change the ownership of the files by running the following command on your Linode server (replacing both instances of your_username with the username for your account on your Linode server):

Now you can edit the config.txt file to change the line to say 0.0.0.0 for the host. Do so by running the following command on your Linode server:

We are now finally ready to try out the example experiment! To do so, restart the docker container. Note that the command this time is going to be slightly different!

You should now be looking at a shell prompt for the Docker container, and if you run the ls command you should see the experiment files:

Go ahead and start the psiTurk shell by running the command psiturk inside of your Docker container. You should now see something like the following: 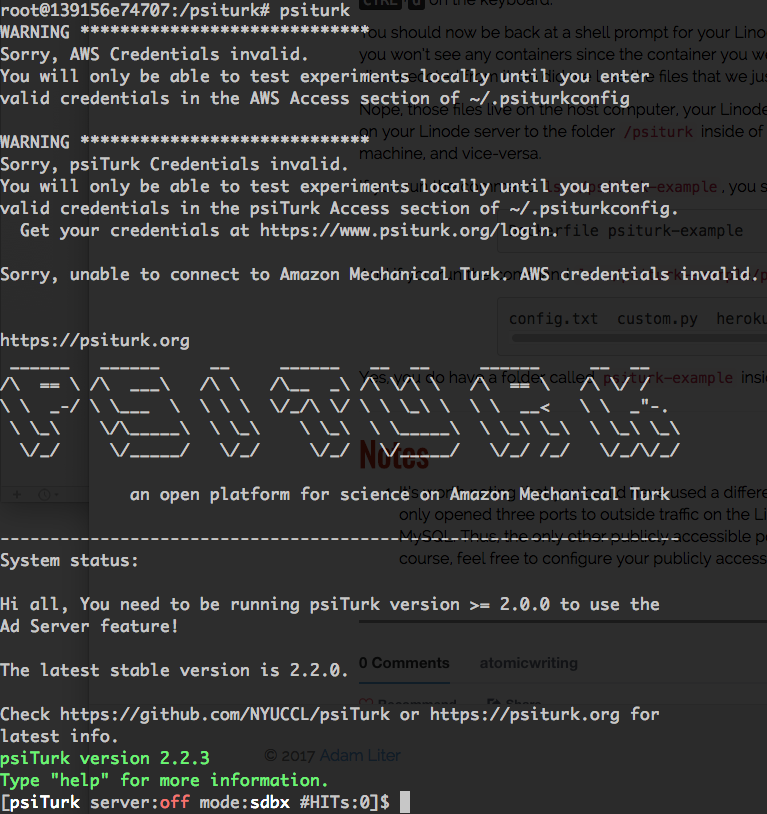 Again, this tutorial series assumes familiarity with how psiTurk works, so if you’re not familiar with the psiTurk shell, I suggest you spend some time reading the psiTurk documentation.

If all goes well, you should see a message that says:

This means that the psiTurk example experiment is accessible on port 22362 of the Docker container … which is published to port 22362 of your Linode server … which is publicly accessible … which means that you can access the example experiment by navigating to the following URL in a browser: http://<LINODE_IP_ADDRESS>:22362 (replacing <LINODE_IP_ADDRESS> with the static IP address of your Linode server)! 🙌  🍾

As exciting is this is, you might want to wait on popping the champagne. (Sorry, I got ahead of myself.)

We still need to set up a MySQL Docker container and hook it up to the psiTurk experiment, which will be covered in the next post.

For now, go ahead and turn the psiTurk server off by running the following command:

Then hit CTRL+d twice in order to exit the psiTurk shell and then the Docker container.

That’s it for this post! In the final post of this series, I’ll cover how to set up a Docker container for MySQL and hook everything together. As always, please feel free to comment with any questions! And, if you do sign up for a Linode account, please consider signing up using my referral link. Thanks! 🤓